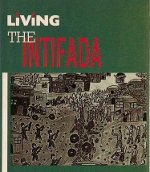 Living the Intifada by Andrew Rigby (London, Zed, 1991) examines the Palestinian intifada as a day-to-day experience with detailed analysis of education, health and the economy under occupation. Writing contemporaneously, Andew Rigby "seeks to bring out what makes the first intifada possible as a form of unarmed resistance involving an entire population".

This out-of-print book is now available as a pdf either by clicking on the chapter headings below or going to the bottom of the page.

Table of Contents for Andrew Rigby, Living the Intifada

The historical background
The peace process

Introduction: the Palestinians as a subject people
The first months: the establishment of the UNC
The Israeli response
Towards an organic state

Introduction
Background: the Iron Fist
The Uprising as unarmed civilian-based resistance
Force, might and beatings
'Non-lethal' methods of repression: gas, rubber and plastic
Deportations
Demolition and collective punishments
Imprisonment and detention
Green cards
'Death squads'
The role of the settlers
The costs of repression

Background
Union of Palestinian Medical Relief Committees
The duality of Palestinian health problems
The Uprising: its consequences for health
Coping with emergency
The normalisation of emergency work
Health care as an instrument of collective punishment
Conclusion

Introduction
Background
The struggle over schooling
The assault on academe
Conclusion

Living The Intifada 1 organisation of resistance.pdf

Living The Intifada 7 Links in the chain.pdf

Living The Intifada 9 Palestinians in Israel.pdf