Popular movements round the world have used unarmed or strictly nonviolent resistance to topple oppressive regimes, demand democratic reforms, resist wars, protect the environment and claim social justice or rights for those suffering discrimination.  There is a growing amount of information about these movements and campaigns both in print and on the web.  The aim of this website is to provide a guide to the range of literature and resources available, and to enable users to look in more depth at particular movements, key figures and organisations in the practice of nonviolent action, as well as the theory of civil resistance and important debates about nonviolence.

This guidance is provided in particular by the online version of A Guide to Civil Resistance, Vols 1 and 2 (published by Merlin Press, 2013 and 2015). Vol. 1 provides summary historical background to numerous people power movements since 1945, i.e. movements which seek to overthrow dictatorship, authoritarian regimes,end foreign occupation or more generally bring about fundamental change in the political or economic system, and annotated bibliographies on each, as well as a wide ranging introduction to the theory and practice of nonviolent action. Vol. 2. focuses on transnational social movements for social and economic justice (including indigenous, feminist and LGBT campaigns and resistance to neoliberal economic policies) and on green and peace movements. It also includes some campaigns which arise out of particular national circumstances, against perversion of democratic standards and/or political corruption, or for regional autonomy or independence.

Both volumes have been transferred to the web in substantially the same form as the printed versions, but with some changes appropriate to their joint presence online, and with a few corrections and some factual updating incorporated into introductory text. New books and articles relevant both to nonviolent action in general and to specific movements or campaigns have appeared since the volumes were printed, and some have been or will be added to the appropriate sections. In addition important new protests which are part of the movements covered, or significant new movements, have emerged since the volumes were printed. The aim is to incorporate these once there is a reasonably substantial literature to cite.

In addition this website provides  pdf and Word versions of a few important books on civil resistance that are out of print. Since important campaigns using predominantly or exclusively nonviolent methods are continually taking place (many not covered the by the mainstream media) this website also has up-to-date news from other websites specialising in reporting nonviolent action. 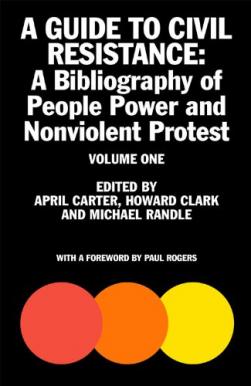 A Guide to Civil Resistance

A Bibliography of People Power and Nonviolent Protest

With a foreword by Paul Rogers

If we talk about 'people power' or 'nonviolent action', most people will immediately think of Gandhi or Martin Luther King, a few will recall the end of the Marcos regime in the Philippines in the mid-1980s, and some others will remember or have heard of the Prague Spring nearly two decades earlier. Moreover, for most activists and others involved in peace action and movements for social change, there will be little knowledge of the theories of nonviolent action and still less of the huge number of actions taken in so many countries and in such different circumstances across the world. Even recent events across the Middle East are rarely put in a broader historical context.

The book is subtitled A Bibliography of People Power and Nonviolent Protest, but it is much more than this. Although the focus is on post-1945 movements, the opening section provides a wide-ranging introduction to the history and theoretical bases of nonviolent action, as well as reflecting the most recent contributions to the literature and citing key reference works and internet sites. All the main sources have accounts of their content and relevance, frequently managing to get to the core of the books or articles in just a couple of sentences.

What really comes across is the sheer range of examples contained within this bibliography. It is extraordinarily impressive, taking us through the campaigns in Eastern Europe and the Soviet Union at the end of the Cold War, the earlier actions in late colonial Africa, campaigns of nonviolent resistance in Latin America and the Middle East and the growing number of 'electoral revolutions' since 2000, especially in post Soviet states and Africa, and the burgeoning resistance to repression in various forms.